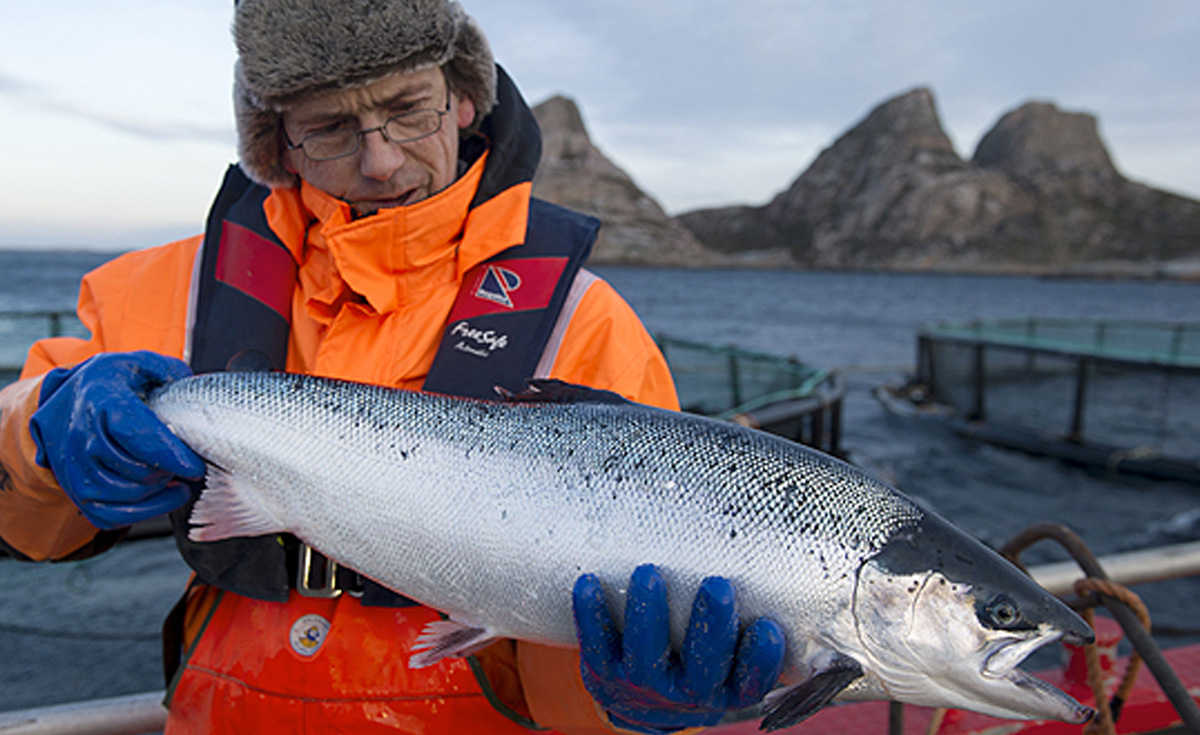 Separate facts from fiction about farm-raised salmon and see how the Norwegian aquaculture industry sets the standard for high-quality, safe and sustainably farmed salmon.

Aquaculture will play a major role in feeding the growing population. And Norway’s aquaculture industry ranks among the world’s leading programs. Every day, 14 million meals of Norwegian Salmon are consumed in more than 150 markets around the world. As the second-largest exporter of seafood, Norway understands that safeguarding the environment and fish stocks for the future is the only way its aquaculture industry can remain sustainable. They also understand the importance of transparency. These days, there is such an overwhelming amount of information circulating in the media that it can be hard to identify true stories from misrepresented ones. Farm-raised salmon has been negatively portrayed in the media, but it’s important to understand that not all farm-raised salmon is the same.

Norwegian Salmon spend approximately the first year of their lives in the safety of a hatchery tank on land until they are large and strong enough for life at sea. The salmon are then carefully transferred to spacious, protected ocean pens that allow maximum freedom to grow. To prevent overcrowding, Norwegian law requires that salmon make up less than 2.5% of an aquaculture facility’s volume. That means each spacious facility is made up of 97.5% water to allow for maximum comfort and a healthy growth cycle. The net enclosures in which the salmon grow have a circumference of up to 200 meters (650 feet) and a depth of up to 50 meters (165 feet).

Norwegian salmon are fed an all‐natural diet comprising both raw vegetable and raw marine material like fish oil and fish meal from wild fish, plus vitamins, minerals and antioxidants, guaranteeing an even better-tasting fish harvested with sustainability and health in mind. Each kilogram (2.2 lbs.) of salmon requires approximately 1.2 kilograms (2.7 lbs.) of fish feed. In its total lifespan, a salmon will therefore consume 6–7 kilograms (13.2–15.4 lbs.) of fish feed. This is very little compared to other animals. For instance, it takes 3 kilograms (6.6 lbs.) of feed to produce 1 kilogram of pork and as much as 8 kilograms (17.6 lbs.) of feed for 1 kilogram of beef.

Ethoxyquin is an antioxidant used as an additive in fish meal to preserve the feed quality during transport. European Regulation 2316/98 authorizes the use of antioxidants such as ethoxyquin in animal feed. Their maximum limit alone or in combination with other antioxidants is set at 150 mg per kilo of feed. In Norway, the content of these antioxidants in farmed fish feed is monitored every year. Recent results from the official Norwegian fish-feed control program showed that ethoxyquin levels were well below the limits set by the EU.

No medication or antibiotics are administered preventively or as a growth promoter in salmon feed. The use of antibiotics in Norwegian Salmon farming has plummeted by 99% since the 1990s, whereas salmon production over the same period has increased from 50,000 tons to more than one million tons. In 2015, less than 1% of the salmon received veterinary treatment using antibiotics.

To put this into perspective, Chilean salmon farmers were unable to develop an effective vaccine and were therefore forced to increase antibiotic use. In 2014, the Chilean salmon industry produced around 895,000 tonnes of fish and used 563,200 kilograms (1.2 million pounds) of antibiotics, according to government and industry data. Antibiotic use had risen 25% from 2013. In contrast, Norway produced around 1.3 million tonnes of fish and only used 972 kilos of antibiotics in 2013.

In Norway, the use of antibiotics is strictly monitored: All medicines have to be approved by relevant authorities; they may only be used when specific diseases are diagnosed, and certified veterinarians sign all prescriptions. Treated salmon must be placed in quarantine before the salmon is allowed to be sold. The intention behind the quarantine is to give time for the organism to clear out all residues of the medicine before being sold. Norwegian Salmon is controlled according to EU regulations for veterinary residues. Recent results document that Norwegian Salmon is perfectly safe and healthy to eat.2

Norway was one of the first countries to introduce a traceability system that tracks details about the health and harvesting of salmon and other fish to ensure reliable food safety tracking. Every aspect of the salmon’s development is closely monitored by technologically advanced systems that feed information to the farmers and their veterinarians. Like any other animal mankind has domesticated and put into modern protein production, such as cattle, pigs, chicken, sheep, etc., farm-raised salmon will also have the need for veterinary attention from time to time. The use of medication in general for Norwegian salmon farming is at the very low end of the scale for any protein production in the world. Effective vaccines have reduced the use of antibiotics in Norwegian Salmon farming to virtually zero. In fact, only 0.00034 grams of antibiotics is used per kilo of salmon produced in Norway, compared to approximately 1 gram per kilo in chicken produced in the U.S. If there is any need for medicine to be used in a Norwegian Salmon farm, the medication has to be prescribed and delivered by a licensed veterinarian.

Dioxins, a collective term for a group of environmental contaminants that includes furan and dioxin-like PCB (polychlorinated biphenyl) congeners, are found throughout the world. Dioxins and furans are released into the air from combustion processes, such as commercial or municipal waste incineration, and from burning fuels such as wood, coal or oil. Burning of household trash and forest fires can also result in the release of dioxins and furans into the environment. Accidental or intentional release of transformer fluids has released PCBs into the environment.3 Therefore, many food sources, including animal protein, dairy and even fruit and vegetables have been exposed to dioxins and PCBs. In commercial fish, PCBs/dioxins are present at very low levels with negligible health effects, compared to the benefits of eating seafood.4

The use of endosulfan as a pesticide is banned within the European Union and in Norway, and it is not applied in any way in salmon farming. The European Food Safety Authority (EFSA) and the European Commission have concluded that the endosulfan in salmon feed is not a risk factor for human health or for animal welfare.5

Advancements in auto-feeding technology have eliminated excess food waste. In order to keep the ecosystem in balance and to protect the cold, clean waters in which Norwegian Salmon naturally thrive, any site used for salmon farming has to rest (fallow period) before a new farming cycle can begin. During this time, the cold, clear waters wash away excess waste. Norway also has a sustainability policy that has the backing of the Marine Stewardship Council (MSC) and the FAO as well as working in partnership with the World Wildlife Fund (WWF).

The above information is based on fundamental principles within Norwegian aquaculture: a transparent, regulated and controlled activity by an industry whose full attention is on producing safe and healthy seafood products. For more information, visit seafoodfromnorway.us or contact mail@seafood.no.